​“We are each an experiment of one.
A unique, never-to-be repeated event.”

George Sheehan died four days short of his 75th birthday on November 1, 1993. He used to say humans come with a 75-year warranty, but it was not age with which he was concerned. It was life in the present. “Don”t be concerned if running or exercise will add years to your life,” he would say, “be concerned with adding life to your years.” He liked to quote William James, who said, “The strenuous life tastes better.” George Sheehan lived a strenuous life. He renewed his life at the age of 45 and turned it inside out. He returned to his body, and to running, and he shared with his readers all of his experiences in this new world of exercise and play, of sweat and competition, of physical, mental and spiritual challenge.

He was born in Brooklyn in 1918, the oldest of a doctor”s 14 children. An outstanding student, he was also a track star at Manhattan College. He became a cardiologist like his father. After medical school he served in the Navy in the South Pacific during World War II as a doctor on the battleship USS Daly. Just before leaving for active service he married “the most beautiful woman on the Jersey Shore,” Mary Jane Fleming, and together they subsequently raised a dozen children.

But success and security in the suburbs were not enough for him. He became “bored” with medicine, with getting “bombed out” every weekend, with falling asleep in front of the TV. He went back to reading philosophy. He read The Greeks, Emerson, Thoreau, Ortega, and James. Then he read Irenaeus, one of the early church fathers, who wrote, “The glory of God is man fully functioning.” George Sheehan knew he wasn”t fully functioning. He started to run. He began in his back yard (26 loops to a mile) and then became something of an oddity in Rumson, NJ running along the river road during his lunch hour wearing his white long-johns and a ski mask.

His new life had begun and its message was soon clear—“Man at any age is still the marvel of the universe.” Five years later, he ran a 4:47 mile, which was the world”s first sub-five-minute time by a 50-year-old.

He began writing a weekly column in the local paper. In short time, the running world was listening. This self-described loner from Red Bank, NJ became one of the most sought out experts on health and fitness. And his door was always open.

He continued the column for twenty five years. Many of these years were served as the medical editor for Runner’s Worldmagazine. He wrote eight books and lectured around the world. “Listen to your body,” was his slogan. “We are each an experiment of one.” One critic referred to his talks as “the running community”s equivalent of a Bruce Springsteen concert, though listening to him was more like taking off with John Coltrane on some improvised solo.”

Dr. Sheehan was diagnosed with prostate cancer in 1986. By the time it was discovered it had spread to his bones. For seven years he lived with the cancer, and “made every day count.” He was a runner to the core and he would not let the cancer change that. He ran until his legs could no longer carry him. Through it all, he remained true to himself, continuing to write about his experiences. This time it wasn”t about running, it was about dying. Going the Distance was his last book. It was published shortly after his death.

George Sheehan never stopped searching for the truths of his life. “We are all unique, never-to-be-repeated events,” he said. His goal was to be the best George Sheehan possible. He was fond of quoting Robert Frost’s line, “I am no longer concerned with good and evil. What concerns me is whether my offering will be acceptable.” 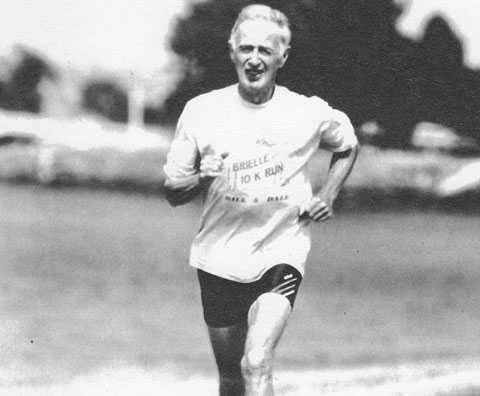 “Don”t be concerned if running or exercise will add years to your life, be concerned with adding life to your years.”