As a family we are very grateful to CBA for this high honor for what is perhaps our father’s greatest legacy.

A Letter from the Sheehan Family

To honor a founder’s legacy, Christian Brothers Academy is building a premier Track and Field Facility to be named for the late Dr. George Sheehan on its Lincroft, NJ campus.  Back in the late 1950’s it was Dr. Sheehan who sought to create an all-boys high school for his growing sons to attend. He teamed up with his father-in-law, Peter Fleming, and Charles Henderson to form the foundation of the effort. As Bishop Ahr said at the opening ceremony in 1959, “Two years ago three men walked into my office and told me what they were going to do, and by golly they did it!” What followed on the grounds of CBA has changed the lives of thousands.

One person whose life would take a new direction was Dr. Sheehan himself. Memories of his love for running track as a young man at Manhattan College flooded back as he watched his sons and the other boys compete. At the age of 45 he decided to join in, and, as he joked, he made the JV team. Soon he was running quarter interval workouts while groaning a few choice words to the amazement of the boys on the team.

George Sheehan’s personal rebirth took flight and his competitive nature drove him to dedicate his energy to Master’s races and marathons. He began writing for the local paper filling his column  with medical and philosophical analysis of all things running. Soon his articles made their way across the country. Over the following years he would author best-selling books and become the voice of a new international running boom. He preached the benefits of living the athletic life to millions for 30 years, never far from the grounds of CBA and the Round Barn track, the soil that nourished his new life and mission.

CBA track and field teams excelled from the start and have been a running powerhouse ever since. The time has come for a much-needed upgrade of the original facilities; the new Sheehan Track and Field will be a top facility in the state providing generations of student athletes their opportunity to train and compete and, in the process, achieve their personal best.

As a family we are very grateful to CBA for this high honor for what is perhaps our father’s greatest legacy. To properly recognize this special tribute we are reaching out to all of you inspired by his writings and friends of our family to let you all know.  We expect to celebrate the dedication of the Sheehan Track this coming Spring and welcome all to come.

As a final kick to finish strong, a CBA alum has generously offered to match all donations in total up to $250,000. The school community and our family would ask your consideration of donating now. Every gift is appreciated no matter the size.  Thank you so much, and we look forward to seeing everyone at the dedication! 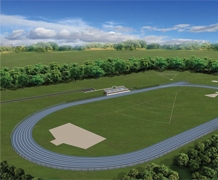