“While high mileage can lead to injury,
high intensity may lead to staleness.”​

If I had to describe the basic principles of my training in as few words as possible, I would say, “Low mileage; high intensity.” I usually run no more than 20-25 miles per week, including speedwork and races.

Despite my low mileage, I stay competitive with runners who do double that amount. Many of my friends put in considerable time on the roads but race infrequently. When they do compete, I can usually give them a run for their money.

My program goes back almost 30 years to my start in road racing. In those days I took my cue from the old-timers: Train 5 miles a day, five days a week, take a day off and then race. Over the years I modified this program, taking more and more time off, putting in one day of speedwork, but still racing every weekend.

I have been astounded at times by how little training I need once I reach a peak. On occasion I have limited my entire running program to one race a week. I have gone as long as a month on such a schedule and noticed no change in my racing times. I know of other runners who for one reason or another had to reduce their running to one race a week and had the same experience.

It now appears that other runners have discovered that “less is more.” The Bare Minimum Track Club in Greenville, South Carolina, has followed a program much like mine with considerable success. Their two main ingredients are a long group run on the weekend and a track workout Wednesday night. Members have done measurably better in both the 10-K and the marathon despite reducing their mileage to about 30 per week.

Current research would attribute their success and mine to high-intensity training. In a study reported in The Journal of Applied Physiology, runners trained 40 minutes a day, six days a week, running as fast as possible.

Then, in three separate trials, they reduced either frequency, duration or intensity. When intensity was maintained, reducing frequency by one-third(to four days a week) or duration by one-third(to 27 minutes per workout) caused no effect. Further decreasing frequency by two-thirds (to two days) or duration by two-thirds( to 13 minutes per workout) had only minor effects over a 15-week period.

However, reducing intensity, while maintaining both frequency and duration, caused a significant decrease in oxygen uptake, heart function and long- and short-term endurance. These changes occurred quite rapidly-within five weeks of the change in the training program.

These researchers established that frequency had the least effect on running performance. Duration became a factor only after it was reduced by two-thirds. This is not to say that frequency and duration are unimportant, but it points out the high-intensity training, such as interval training and races, is the key to getting the most out of your ability.

All this suggests that you can significantly reduce your training time and still run as well or even better than you do know, First, take three days off a week. On the other four days do a total of 3 hours running, incorporating (1) a race, (2) a workout of interval quarters and (3) a couple of longish runs, 45 minutes to an hour at an easy pace.

There are hazards, of course, to such programs. While high mileage can lead to injury, high intensity may lead to staleness. My difficulties have rarely been due to overtraining; they have been caused by overracing. So from time to time and especially after PRs, I find it helpful to back off from interval workouts and substitute leisurely runs to allow my body to recover. (1991) 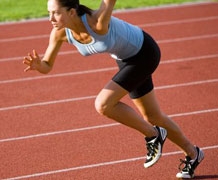 ​high-intensity training, such as interval training and races,

is the key to getting the most out of your ability.