The year my daughter entered college in Boston, she came to see me in the marathon. She was, she told me later, the only calm and rational person among the thousands that jammed Prudential Center. They cheered and yelled and applauded every finisher. They cheered the young, cheered those from Harvard, cheered those from California. And they cheered even more wildly when someone they knew came into sight. Through it all, she stood as quiet and as staid and withdrawn as an Episcopalian at a revival meeting.

Then I arrived. I made my turn into that long, wide plaza, which at that moment was completely empty except for me and the cheering group. The finish line was still an eighth of a mile away, but it didn’t matter. The race was over. The crowd’s cheers told me that. I had made it. And this was my victory lap. Almost an hour behind the winner, having nailed down 312th place, I was suddenly renewed and refreshed. I was running my home run home, and every stride I took revealed my joy.

Then I saw a figure break out of the crowd into the white expanse that lay between me and the officials at the finish. It wasn’t until another fifty yards that I recognized who this yelling, waving, cheering person was. My daughter. The finish of any marathon can be that kind of emotional experience

Somewhere along the way the runner has been challenged. He has met pain fairly and overcome it. He has had a real deliverance. And at the end of that ordeal, both runner and spectator are aware that something very special has happened.

Sometimes this awareness is expressed in ways that neither runner nor spectator will ever forget. For me that occurred in Boston. For a friend of mine the setting was the Scottish Games at Grandfather Mountain. The marathon there is one of the most difficult in this country. Its 26.2 miles through mountainous country test a runner as almost no other race does. My friend survived that test and ultimately conquered the course. And when he came to the last climb where the finish was supposed to be, he heard the sound of bagpipes.

Now, as everyone knows, the skirling of bagpipes stirs the passions and emotions inaccessible in other ways. So my friend, already overcome by reaching the end of this ordeal, was in tears when he breasted the hill.

And now he saw that he was on a great plain encircled by the camps of the various Scottish clans. And each sent up a great shout as he passed them. What place he took, he sometimes forgets. But he will never forget when time stood still on that plain atop Grandfather Mountain and all around him were happy cheering people and sound of bagpipes. All this has, of course, nothing to do with winning and losing.

Winning and losing is what you do in team games. The runner is not in a game; he is in a contest. And that is a word whose Latin root means to witness or testify. The other runners are witnesses to what he is doing. And therefore, anything else than all he can give is not enough. When you race, you are under oath. When you race, you are testifying as to who you are.

The distance runner understands this. He is the mildest of men. Quiet and even-tempered and rarely given to argument. He avoids confrontation and seeks his own private world, but in a marathon he becomes a tiger. He will go to the end of his physiology to find who he is and what he can do. Put himself deeper and deeper into a cauldron of pain. What is necessary becomes possible, however absurd the effort may be. But such interrogations, if they are to mean anything, should be infrequent. If the marathon is to measure a man, it should synchronize with the cycles of his growth. Maturity is an uneven, discouraging process. Becoming who you are is not done on schedule. There are years when nothing seems to happen.

But one must still say that marathons can make memories like no other event in your life. And that could be an argument for running one every month. When the rocking-chair time comes, you’ll be all set. 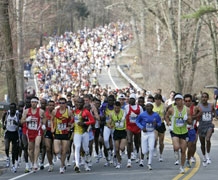 “But one must still say that marathons can make memories like no other event in your life. And that could be an argument for running one every month.”

“When the rocking-chair time comes, you’ll be all set”