​“Life, like it not, is a handicap event, and
the winner may finish deep in the pack.”

About one year ago, I was standing on the podium of a Unitarian church in San Diego answering questions following a talk on “What’s New in Training, Nutrition and Injuries.” The runners in front of me were asking questions that went deeper than training for races, carbo-loading, and exercise-induced asthma. “What are your main concerns?” someone asked. “What would you do differently?” queried another. “Have you become more religious?” asked someone else. They were looking at me as an elder and wondering what happened after a lifetime of running and with time running out.

I was silent for a time. Then, my arms in front of me, palms upward as if in supplication, I looked heavenward and asked, “Did I win?”

It was the question of a schoolboy being asked by someone just a few years short of being truly old. I have spent my entire life playing a game in which I am not sure of the rules or the goal. At this point I was asking of whoever is in charge the big question: “Did I win?”

Although I am seventysomething, I still wonder whether I played this game of life well enough to win. It is so difficult to know what really matters. It’s as if all my life was spent studying for a final examination, and I am not sure just what was important and what wasn’t.

Did I win? Does any of us know? Is there anything we have done that assures us we have passed the test? Can we be sure we did our best at whatever it was that we were supposed to do?

It is a tough call. Obituaries are filled with achievements that mark those we think of as successful. But obituaries tend to conceal biographies, and those biographies tell us the deficiencies and defeats of even the great and near great.

So we don’t know. Alexander Woollcott once said to his fellow alumni of Hamilton College,

“Some of you are successes and some are failures. And only God knows which are which.” Even with clear evidence of weakness or wrongdoing, of having a guilty conscience or none at all, we may be looking at someone who passed the test, someone who knew and did what is necessary for the winning of life.

Each one of us is an experiment-of-one. Each is a unique, never-to-be-repeated event. Our talents vary. Our defeats are our own. Our environments offer special challenges. We evolve from a constant interaction between instinct and will, between emotions and reason, between environment and good fortune. Life, like it or not, is a handicap event, and the winner may finish deep in the pack.

I think of my sins and the passions that occasioned them and suspect they were not all that important. What is important is the lying and the cruelty and the greed, the daily obstacles to making my life what it could have been.

When Robert Frost was in his sixties he wrote, “I am no longer concerned with good and evil. What concerns me is whether my offering will be acceptable.”

Frost wrote some hard things-and this may be the hardest and truest of all. The answer to the question “Did I win?” is “Yes, if your offering is acceptable.”

still too many missing pieces… 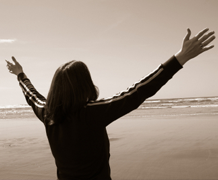 ​“Life, like it or not, is a handicap event, and the winner may finish deep in the pack.”

“Yes, if your offering is acceptable.”