​“When I see women running,
I see a new world coming.”

For one thing, these runners are not girls but women. Anyone who has had their consciousness raised knows better than to call a woman a girl, and it is about time everyone learned that.

Furthermore, women can be excellent runners. Some have amazingly high maximum oxygen uptakes, and their muscles can contain slow- and fast-twitch muscle fibers in the same ratio as men’s.

I have discovered in races and in training that women runners spread across the same spectrum as men, from very good to very bad. I have been beaten regularly by the best and have had some head-to-head struggles with those not quite so talented. When it comes to determining who’s faster, it’s not a question of the sexes. It simply depends on who is best on that particular day.

What upsets me most about the hospital corridor comments is the implication that something’s wrong with women who participate in sports, particularly in mixed sports. Some people suggest that the whole thing is somehow unnatural.

But women gain so much in giving up the limitations society places on them. Running removes what Ortega called their perpetual self-concealment. Through running, a woman can come to know herself truly, not only her body but her soul as well.

People who see only the differences between men and women do not understand this. Their herd-thinking cannot conceive that sport has something to offer women, who, they believe, need nothing but children, church, and kitchen. These people cannot imagine any benefits from male-female competition. And their emphasis on the biological and social perpetuates the war of the sexes.

The truth is that sports, and that includes men running against women, may well be the salvation of the male-female relationship, the answer to our marriage problems, the solution of the eternal discord between what is masculine and what is feminine.

You may find this theory far-fetched, but consider what Platobelieved: Our aim should be to find our other half. This cannot happen unless we reveal ourselves, body and soul, to the other. And where can this be done better than in sports? It is in those arenas that a person finds his or her moment of truth, comes to know what she or he has been all the time, and, in that knowing, reveals it to others.

We need more of this. Leisure and free time now make the psychological problems in our marriages more evident. In 1976, for the first time, divorces in the United States exceeded one million. Our affluence and 40-hour work week have allowed more communication, but we are failing to take advantage of these great opportunities.

Eventually, love, marriage, communication, good conversation or good silences depend on a total meeting with someone who is most like ourself. So that, as the Russian philosopher Berdyayev put it, we are “united in one androgynous image, overcoming our loneliness.”

That, of course, is the ultimate: creating union, knowing the other, overcoming loneliness, bringing together two solitudes. 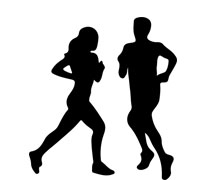 “They know when they are simpatico.”