“Reach for what you cannot.”​

You may have seen my name in the Shore Marathon summaries on Monday. It was there in the agate under “Other area finishers”; 69, George Sheehan, Shore A.C., 3:18:32. Not bad, you might think. Not bad for place, with 235 starters. Not bad for time, about midway between my best(3:02) and my worst (3:33) serious efforts. You might think that. And you would be wrong. Because it was a marathon without tears, without pain, without distinction. It was a marathon that I am ashamed of, a marathon I would like to forget. It was a marathon that proved there is a point where prudence becomes timidity, where caution becomes cowardice, where respect becomes fear. The 26.22-mile distance tends to make all runners prudent, cautious and respectful. “Anyone,” said the great Percy Cerutty, “can run twenty miles, but only a few can run the marathon.” That extra six miles changes the game from penny ante to table stakes. Your entire physical bankroll can dissolve in a matter of minutes.

Disaster Awaits?
We are not quite sure why this happens. Some physiologists suggest that at 20 miles the body exhausts its available sugar supplies and must switch over to another form of energy metabolism. Maybe so, but whatever the cause the runner knows that however he feels at any particular stage of the race, disaster may be waiting for him at the 20-mile mark. This makes marathoning a chancy and risky business where the initial pace can be all decisive. Too slow and you have a poor time: too fast and you may not finish. So those even more timid sometimes use the first seven miles to warm up and thus change the marathon into an ordinary twenty mile road run.

That is just what I inexcusably did. I had the mileage to go all out. Long runs with my Shore A.C. friends, meet director Tom Baum, teacher Gene Minor, psychiatrist Paul Kiell and Pat Barrett, the Monmouth College freshman. And a fast ( 62 minutes) ten miler the week before when I beat them all. But within a mile after the start of the marathon the quartet were minutes ahead of me and my warmup pace. A pace I kept at not for just seven miles but the entire outward leg of 13.1 miles.

A mile and a half from the turnaround point they passed me going the other direction heading for home. Three miles and 24 minutes ahead of me they were giving the race and the course and the weather (it was a perfect 40 degrees and little wind) all they had. They had accepted the challenge. They were making themselves vulnerable, opening themselves to the possibility of a great achievement or a wipeout.

Meanwhile I was sliding. That’s what Ed Gentry, the get-through-the-day-man in James Dickey’s “Deliverance” called it. “Sliding is living antifriction.” He said, “It is finding a modest thing you can do, and then greasing that thing. It is grooving with comfort.”

But even groovers and sliders sometimes get religion. I did at the halfway point. The fact that I was in 154th place may have helped a little. Provided some additional incentive. But whatever, I set out at full throttle for my colleagues up ahead. I went through Sea Bright like the Blue Comet and hightailed through Long Branch passing seven or eight runners each mile. With five miles to go I caught the struggling Kiell (who was to finish in his best ever time and qualify for Boston) and a quarter mile from home passed Minor now walking Up ahead Baum had finished in a 3:03 and Pat Barrett had become the tenth fastest women marathoner in the world with a 3:04.

Niceties at Finish
The people at the finish line said some nice things to me. The time wasn…rsquo;‘t all that bad and I had run a helluva last 13.1 miles. But I knew where I should have been. Up with Baum and Barrett or walking. I had chosen the middle way, the way of the lukewarm. And afterwards when there were awards for almost everybody, I didn’t wait around. I wanted to memento of that race.

I may put that slogan on my running shirt. If there is a better rule for the marathoner, I have yet to hear it. If you try to be all you can be, you have to expect a failure from time to time. Finding the limits of your ability will most certainly end eventually in a walk to the finish line. Which is why you can never tell from the agate who is a failure and who is a success; who is simply out there grooving and who is reaching what he cannot; who is a twenty miler and who is a marathoner. Only God and the runner knows that. 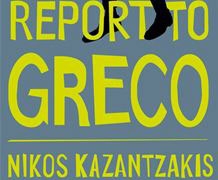 “Nikos Kazantzakis in “Report To Greco” ​

…who is a twenty miler and who is a marathoner”