​“Running is not a religion, it is a place.”

Is Running a Religion?

The reporter in Anchorage was skeptical. “Is it true,” he asked, “that you have called running a religion?” I had come to Alaska feeling insecure, not certain of what I had to offer these pioneer people. My talks were not yet formulated in my mind. To me, it looked as though Alaskans were already fit, and now I was being challenged in the other values I might claim for a running program.

I thought about the question. If I hadn’t called running a religion, I had certainly implied it. I had repeated Jim Fixx’s story of the woman who described her husband by saying, “Ted used to be a Methodist, but now he’s a runner.” And I had compared running to Oliver Alden’s pursuit of sculling and horseback riding in George Santayana’s The Last Puritan. “A wordless religion,” Santanyana had called Alden’s regimen.
But Santanyana thought of religion not as truth, but as poetry. And he was an observer of athletes, not an athlete himself. He had come up with a poetic phrase and missed the point. And so had I. But fortunately, now I knew the answer. I looked at the reporter and said, “Running is like Alaska. Running is not a religion, it is a place.”
This idea had been germinating in my head during the flight from Seattle. I had read an account of a seven-month stay in a Trappist monastery by Father Henri Nouwen, a Belgian priest well known in literary and academic circles. His book, A Genesee Diary, gave me a new insight into the true nature of the running life. Nouwen’s problems are remarkably similar to mine. The things that drove him to retire to the monastery are the same as those that plague me day after day. He was caught in an ascending spiral of activity. Each talk, each article, each book, ignited requests for more talks and articles and books, every ring of the phone another demand on his time.
This way of life is addictive. Withdrawal symptoms occur whenever requests and letters and compliments diminish or cease. So the victim has little choice except to continue and even escalate the activity. “While complaining of too many demands,” Nouwen writes, “I felt uneasy when none were made. While speaking of the burden of letter writing, an empty mailbox made me sad. While fretting about my lecture tours, I felt disappointed when there were no invitations. While desiring to be alone, I was afraid to be alone.”
The priest who had been teaching and lecturing and writing about the importance of solitude, inner freedom, and peace of mind had become a prisoner, locked into unceasing activity.

Finally he made the decision to step back. The time had come, he said, to restore some solitude, some stillness, some isolation to his life. He needed to take a long look at himself and his role in preaching the word of God. So he took a leave of absence and entered the Trappist monastery at Genesee, near Rochester, New York. It was, he found, a perfect place to retreat and restore himself. The monastery is a place for the body. Father Nouwen was assigned to work in the bakery, helping to make bread, the monks’ commercial enterprise. Later, he was chosen to gather stones to build a new chapel. But the monastery is also a place for the mind. Father Nouwen had his own little sanctum for meditation. Even at work or in the company of others, talking was kept to a minimum. The only demands on his mind were those he made himself. And of course, the monastery is a place for the soul. “The monastery,” says Father Nouwen, “is not built to solve problems, but to praise the Lord in the midst of them.”” The monastery is a place for ordinary people, for sinners as well as saints. The work sometimes chafed. Relationships were strained. Thought came slowly. Prayer seemed impossible. Nouwen was still Nouwen. But all the while, he knew he was there because of an inner “must.” And he stayed because, he says, “I knew I was in the right place.” And all the while, the priest expected to come out a different person, more integrated, more spiritual, more virtuous, more compassionate, more gentle, more joyful, more understanding. “I hoped that my restlessness would turn into quietude, my tensions into a peaceful lifestyle, my ambivalence into a single-minded commitment to God.” But upon leaving, Father Nouwen knew there had been only a lull in the battle with himself. He was the same man, with the same problems. So he asked the abbot for advice. “You must put 90 minutes aside every day for prayer,” the abbot told him. If Father Nouwen was to take Genesee home with him, he would have to take time for his daily dialogue with himself and his God. Without constant renewal, what he had experienced at the monastery would vanish. Otherwise, for the rest of his life, he would awake in the morning with the same tendencies, the same desires, the same sins that he conquered only the day before. Only a return each day to the monastery would save him.

Running, I told the reporter, is just such a monastery-a retreat, a place to commune with God and yourself, a place for psychological and spiritual renewal. 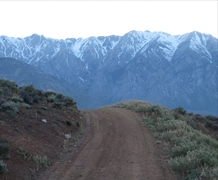 “Running, is a place to commune with God and yourself.” ​

Running is like Alaska. Running is not a religion, it is a place.